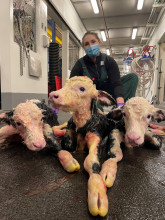 The cow's owners were initially only expecting one calf until an ultrasound by their primary care veterinarian revealed there were twins. When the cow went into labor, the owners could feel the tail of a calf, meaning the calf was coming out backward in a breech position. That's when they decided to bring her to Ohio State. When Ohio State veterinarians Dr. Michelle Carman and Dr. Joe Lozier examined her, they were able to correct and pull the first calf as well as the second calf. When checking for any trauma to the uterus and birth canal, the presence of another calf was identified. Sure enough, there were triplets! All three were females and all 47 lbs. They all remarkably have similar color patterns.

According to Dr. Jeffrey Lakritz and Dr. Marco Coutinho da Silva, since the cow was implanted with one embryo but she actually delivered triplets, this suggests the embryo split twice which is rare. Triplets are uncommon compared to twins and further diagnostics are needed to confirm they were identical.