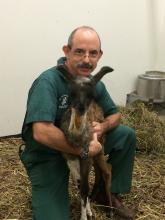 Spittin’ Creek Llamas and Alpacas brought Blue Moon, an adorable cria, to the VMC when she was born 29 days premature. Blue Moon came in recumbent, with a poor suckle reflex and failure of passive transfer. Upon arrival, she was given a plasma transfusion, IV fluids and a broad-spectrum antibiotic. After receiving intensive care for four days in the Hospital for Farm Animals, Blue Moon was discharged and acting like a normal cria. Her prognosis looks good. Thanks also to Angela Graham, Kristin Bertini, and the Large Animal ICU staff for milking Prominence every two hours to feed Blue Moon. Weekly updates can be found every Thursday at the farm's Facebook page: Spittin' Creek Llamas and alpacas.