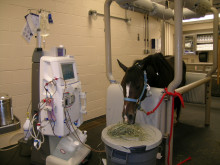 (Right: April eating hay as she receives her dialysis treatment at the Veterinary Medical Center.)

Red maple leaves are a beautiful sight in autumn, but for horses, they can be deadly if eaten. The naturally occurring toxins in wilted maple leaves can cause the animal’s red blood cells to break down, leading to anemia and red or dark-brown urine — and possible kidney failure.

In a recent case at The Ohio State University Veterinary Medical Center (VMC), a horse presented with the symptoms of red maple leaf toxicity. Clinicians in Equine Medicine and Small Animal Internal Medicine collaborated in the VMC’s first-ever use of hemodialysis to successfully treat a horse. The case also provided a learning experience for both teams in how to integrate hemodialysis in equine patients.

After April, an adult quarter horse, arrived at the Galbreath Equine Center, the Equine Medicine team—Internal Medicine residents Erin Pinnell, DVM and Hannah Kinsella, DVM —found that her urine color started to improve, but then saw her kidney function worsen dramatically. The team was concerned because another horse from a neighboring pasture had died from kidney failure after eating maple leaves.

“We’re fortunate to have a mobile dialysis unit,” Gordon said. “We rolled these machines into the barn, hooked it up and got the water system up and running.” The teams first tested the equipment, then gave April her first treatment, which took 5 hours on a Friday night. The team let her rest on Saturday and did a second treatment for 10 hours on Sunday.

For the second treatment, however, the teams inserted an additional catheter since in the first treatment there wasn’t enough blood flow to be very effective. The largest of the Small Animal Medicine dialysis catheters are typically used for 75- to 100-pound dogs, Langston said. April weighed around 800 pounds.

“A horse has about 15 times the blood volume of a dog, so we had to figure out how to pull more blood out,” said Gordon.

In a typical dialysis, blood is removed through one catheter, passed through a filter and cleansed, then returned into the patient from the other side of the catheter, Langston noted. In April’s case, the team placed a “Y” piece to connect the two catheters and added two filters to double both the amount of treatment and the treatment time.

“This was the first time we have performed hemodialysis on a horse at Ohio State, and it is rarely done elsewhere,” she said.

The treatment was a success. April’s creatinine level fell from a high of 8 to 3, with normal kidney values being about 1.8, and she went home after a couple of days. She was still anemic back at home, but reportedly doing fine.

"April was a really unique case and as a resident here at the VMC, it was an incredible learning opportunity to integrate hemodialysis in a horse,” said Pinnell. “Not only did we gain valuable knowledge regarding a procedure not commonly done in equine patients, we also were able to send April home, which is one of the most rewarding aspects of veterinary medicine.”

Kinsella concurred. “It was so rewarding to see how much April improved with a procedure we’ve never performed before in equine medicine, and it’s honestly a few days of my residency that I will never forget.”

She also enjoyed the collaboration with Small Animal Internal Medicine. “My hope is that we can continue to learn from this experience, and potentially be able to use it in other horses with acute kidney injury.”

Gordon agreed. “That’s the beauty of dialysis. Every treatment is different.”

The procedure’s use in equine was a learning experience for everyone, advancing the college’s goal to Be The Model™ comprehensive college of veterinary medicine and referral veterinary medical center of choice by delivering accessible, cutting edge care.