We know that your pet is very important to you. A companion, a friend, and in a real sense a member of your family. In order to reduce the number of animals ending up in shelters or being euthanized, we recommend all cats and dogs be neutered.

Both male and female dogs and cats can start reproducing between the ages of six to nine months. Therefore, we recommend neutering between 4 and 6 months of age.

Female dogs generally go through an estrus or heat cycle every six months. This is accompanied by a proestrus or bleeding cycle prior to her true heat cycle in which she is very receptive to the advances of male dogs. This heat cycle may last for several days or up to three or four weeks. Often female dogs will experience some personality changes during heat cycles such as becoming short-tempered or anxious. 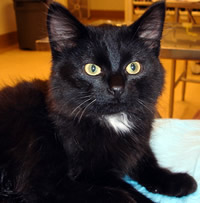 Female cats come into heat cycles every three to four weeks during certain times of the year. Many female cats will become nervous during these heat cycles and exhibit unusual behaviors such as rolling on the floor, furtively hiding, or wanting constant attention. Female cats often become quite vocal, too, meowing plaintively through their cycle.

Surgical neutering (spay) of female dogs and cats called ovariohysterectomy, completely eliminates all heat cycles and the accompanying unwanted bleeding cycle, nervousness, and desire to mate. Neutering your female dog or cat will also protect your pet from uterine infections and other diseases as well as difficult or dangerous pregnancies. Studies show that by neutering your female dog before her first heat cycle, you can greatly reduce her chances of developing mammary cancer later in life. The surgery includes the removal of the ovaries, fallopian tubes, and uterus.

Most male dogs and cats are ready and willing to reproduce by the time they are six to 12 months of age. They are able to breed consistently throughout the year or whenever they are exposed to a receptive female. Both male dogs and cats are prone to wander in search of romance and find themselves exposed to fighting with another animals or dangers such as cars. In addition, male cats are well-known to mark their territories by spraying odorous urine on furniture, walls, shrubs, etc. Male dogs are sometimes equally anxious to mark their territories. 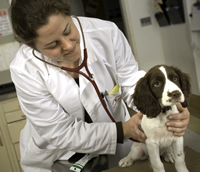 Surgical neutering of male dogs and cats, called orchiectomy, eliminates any reproductive behavior and reduces urine odor and the desire to spray. Your male dog or cat will continue to have his own unique personality. He will be less likely to roam and enjoy staying at home more. The surgery removes the testicles.

Deciding when the best time to neuter your pet is a decision you should discuss with your veterinarian. At our community practice we typically recommend neutering between 4 and 6 months of age. This procedure is performed by the Soft Tissue Surgery Service. For more information please call (614) 292-3551.