Dewey: Back in Action

Dewey: Back in Action

After their dog, Dewey, suffered a urinary tract infection and kidney removal, Dan and Kim Orr were ecstatic with his recovery, and couldn’t be happier to have him back home.

Dewey, a nine-year-old Bichon Frise, was adopted by the Orr’s almost six years ago at Pets Without Parents, a non-profit, no-kill, all-breed shelter for cats and dogs located in Columbus. And now in 2016, Dan and Kim have rescued Dewey for a second time. Dan, a former morning radio show host at 94.7 Sunny 95, QFM96, Rewind 103.5/104.7 and Mix 107.9, says that after arriving home from a day at work, he first noticed Dewey’s behavior change — but was not aware of the severity of his condition. 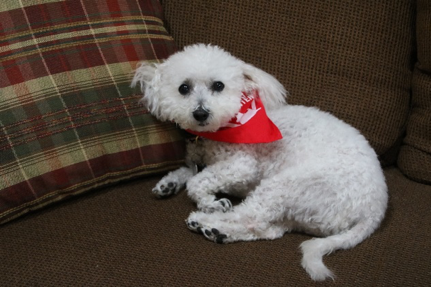 “His drop-off was immediate,” Dan said. “The next day he wasn’t meeting us at the door, and just staying outside; he wasn’t his effervescent self.”

After being referred by Gahanna Animal Hospital,   the Orr’s then brought Dewey to The Ohio State University Veterinary Medical Center where they met Michaela Gruenheid, a small animal surgery resident at Ohio State. Prior to blood work, Gruenheid says a urine analysis and an abdominal ultrasound were performed to make a diagnosis, and it was determined that Dewey possessed a urinary tract infection with concurrent left sided kidney infection, bladder stones, and a stones in the left ureter.

With this being the case, Dewey underwent a left nephrectomy (removal of the kidney and ureter) and cystotomy (opening of the bladder and removal of the stones), and recovered in the ICU with IV fluids, antibiotics, gastroprotectants, medication, and nursing care. Kim says she and Dan were continuously kept in the loop of Dewey’s location and condition at all times during their visit to Ohio State - which in any case, means everything to a pet owner.

“I cannot credit the VMC enough for keeping us updated on everything,” she says. “We had a couple people checking on us at all times, and I thought that was really great.”

After surgery, Gruenheid said her team continued to monitor his blood work. Histopathology (to verify there is no malignancy is involved) and culture (to be able to choose the right antibiotic for Dewey's infection) were performed from the kidney and ureter, the stones were sent off for analysis. 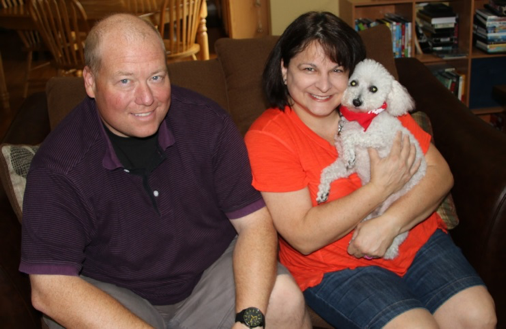 “Dewey's stones came back as Calcium Oxalate, which unfortunately cannot be resolved with a certain food and are more likely to return, thus making increased water intake to dilute the urine very important,” Gruenheid added.

Signs for UTI include frequent urination, straining to urinate, sometimes associated with pain, dribbling, and blood in the urine. In general, Dewey can live a normal life, however, the Orr's need to inform every veterinarian of his missing kidney. Although this may be the case, Gruenheid says that as long as Dewey's other kidney is functioning well, his prognosis is a bright future ahead.