It’s no secret. Pet ownership has the power to transform lives. Forever our loyal companions, our pets can improve the quality of our health, serve as a vibrant source of unconditional love, and are great teachers of patience and peace. However, service pets like Sofie “The Giant Magic Dog” have a special purpose because the remarkable benefits of pet ownership aren’t just exclusive to the members of their household —it’s also accessible to those in times of great need. Throughout her five years of working as a service dog, Sofie impacted the lives of hundreds.

Owner Tim DeWolf recalls Sofie’s natural ability as a Newfoundland to grab the attention of strangers, “When she walked into the room, it was pretty close to impossible to not notice she was there and when people see a dog that large it sparks their interest.” Sofie was given her nickname by a patient at the VA hospital in Cleveland. He often watched Sofie interact with patients and the hospital staff. One day, he said to Tim, “There’s so much stress and anxiety here but whenever you come with the giant magic dog, she’s able to put everyone at ease a- it just feels different when she’s around.”

Throughout the five years of her service, Sofie assisted over 200 veterans and spent thousands of hours in ER's hospital rooms, half-way houses, homes and wherever she was needed. Once, she spent 24-hours with a single veteran during his withdrawal from opiates. Today that veteran remains drug-free and considers Sofie to be instrumental in his recovery. He now owns his own service dog- a Newfoundland. In addition to being a service dog, she was also a philanthropist.

Sofie was instrumental in raising the thousands of dollars needed to create a memorial bench at the Ohio Veterans Memorial Park in Clinton, OH. It is the only military memorial park with a memorial for those who lost their lives to the war within. The memorial wall contains the names of Ohio veterans that died in all of the wars . The wall offers families a place to honor and remember their loved ones. In 2015 Sofie was presented with the Hero for Andy Award from the Andy Nowacki Foundation for comforting veterans who suffer from Post-Traumatic Stress Disorder. The award honors those who have displayed heroism in community impact, community safety, medical or the military. 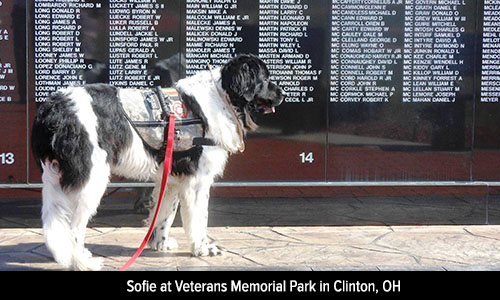 The following year, both the Ohio Senate and House of Representatives issued proclamations to owner Tim DeWolf- commending him for Sofie’s work with veterans in the community. Veteran William Serafin experienced Sofie’s abilities first-hand. “I never knew what a service dog was before that but after meeting Tim and Sophie I now know that she was THE service dog.” He continued, “From times awaiting doctor visits at the VA to waiting in a courthouse with Sofie and Tim by my side it was better than any anti anxiety medication I've ever known and when my mom had a stroke they were at the hospital within minutes to calm the storm.

After an impressive portfolio of life-changing work, Sofie passed away in January of 2017. Owner Tim DeWolf recalls the pain of having to say goodbye to his long-time companion. “Sofie was a special dog and I pray she knows how much we loved her, how she transformed people’s lives and that she was an important part of the day for so many.”  He added, “We were partners and all the success we’ve had with veterans, I owe it all to Sofie because without my Giant Magic Dog, I’m not sure we would have been able to make deep and lasting connections with our veterans who need support and encouragement the most.”