Lilies: no friend to cats 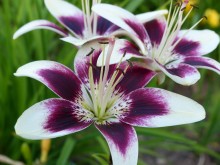 With the spring season upon us, more flowers are making their way into the household.

Flowers are known for sprucing up the environment, and less known for posing a significant threat to pets. One of the deadliest flowers a cat owner can bring into their home -despite its beauty- is the lily.

Even the tiniest nibble of a lily plant can cause rapid kidney failure in cats and if not treated immediately, the toxicity can be fatal in as little as 72 hours. If a cat has ingested any part of a lily, several symptoms they may exhibit include:

The sooner a cat gets treatment, the better the chances are for survival!

Recently, Ohio State veterinarians saved a 2-year-old cat named Phoebe who had eaten a lily plant. When kidney failure had progressed even after rigorous treatment, Phoebe's owners were told that the only option left was dialysis. Even with dialysis Phoebe only had a 50 percent chance of making it. Luckily, she pulled through, and her owners learned of the dangers of lilies the hard way.

It's unfortunate that these flowers are common household plants, and often included in various floral arrangements without identification. It should also be noted that the entire plant is toxic to cats, including petals, stamen, leaves and pollen.

Click here to check out a list of toxic and non-toxic plants for pets from the American Society for the Prevention of Cruelty to Animals.