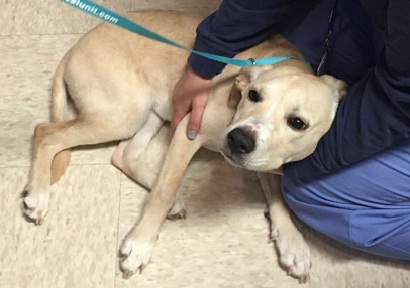 In May, a lab mix puppy named Zelda was brought to Rascal Animal Hospital and Emergency Care  with two broken legs. Veterinary staff at the hospital suspect that Zelda was abused by her previous owners, as they were forced to bring her in after reports of a dog with severe injuries.

They found her legs had been broken for weeks, meaning the surgery would be more complicated, so RAH contacted the Veterinary Medical Center. One break was in Zelda's hip area and the other was in her lower leg.

The hospitals were able to raise most of the money for Zelda's surgery through donations, and the 2-hour procedure was successfully completed yesterday by orthopedic surgeon Dr. Jonathan Dyce. She left the VMC Friday, June 12 at noon to start her recovery. Fundraising efforts by RAH for Zelda's medical expenses continue.

The story was featured on Channel 4, NBC: "Zelda, Dog With Two Fractured Legs, Gets Surgery at OSU"