An investigative team of Center for Retrovirus Research faculty has been awarded a $9.1 million program project grant (PPG) from the National Cancer Institute to investigate retroviral models of cancer (years 16-20; 2020-2025). The ultimate goal of this integrated multidisciplinary and multiinstitutional Program Project Grant is to utilize the human T-cell leukemia virus type 1 (HTLV-1) T-cell immortalization model to gain understanding of the microenvironmental, cellular, and viral factors that lead to progression to leukemia, and with this knowledge, to identify unique targets for diagnosis and treatment of HTLV-1 infection and adult T-cell leukemia (ATL) and related leukemia/lymphoma. 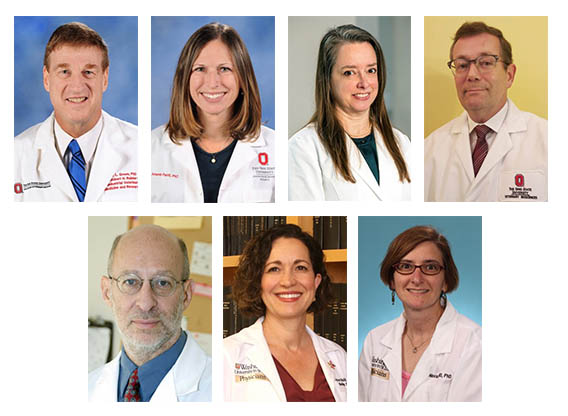 The PPG is designed to foster synergistic interactions between the laboratories and characterize mechanisms that define retroviral exploitation of the cellular environment during HTLV-1 replication and disease progression. Concurrently each laboratory has key interrelated goals to define events that control the transition of lymphocytes from activation through immortalization and transformation.  The specific aims are:

Aim 1: To characterize the actions of the HTLV-1 hbz mRNA and HBZ protein on human T-cells related to cell dysfunction, establishment of viral latency, the interrelationship with CTCF function and hbz effects, and the impact of hbz on microenironment.

Aim 2: To determine if and how retrovirus-induced cellular changes can exploit unique microenvironments that contribute to viral latency, paraneoplastic disease syndromes and ATL.

In Project 1, Drs. Patrick Green and Amanda Panfil at The Ohio State University, will characterize the mechanism of action of hbz gene products as it relates to HTLV-1 infection, viral latency, and emergence of ATL. The major focus is on identifying and characterizing cellular binding partners that interact with hbz mRNA and HBZ protein, and further to determine the impact of those interactions on viral pathogenesis.

In Project 2, Drs. Katherine Weilbaecher and Deborah Veis of Washington University, St. Louis, MO, lead an integrated project designed to define the molecular mechanisms through which HTLV-1 transformed cells interact with cells in the bone microenvironment, which include but are not limited to osteoblasts, bone marrow stromal cells, macrophage lineage cells, and osteoclasts. The specific focus is on the relationship between HTLV-1 hbz expression and both the Wnt non-canonical pathway, involving Wnt5a, and HPSE. A central focus of this work is to utilize mouse transgenic and humanized animal models to evaluate the relevance of these pathways on HTLV-1 bone pathology.

Project 3 is led by Dr. Lee Ratner of Washington University, St. Louis, MO. The overall goal of this project is to determine if and how CTCF modulates the behavior of HTLV-1 infected T-cells as it relates to virus expression, hbz regulation, methylation of provirus elements, site of virus integration and effect on surrounding host genes.

Three support Cores facilitate the integration at administrative and scientific levels. The Adminstrative/Biostatics Core, which is directed by Dr. Patrick Green is responsible for maximizing integration between the PPG projects and providing the optimum statistical analysis (Dr. Soledad Fernandez and Lianbo Yu) for each of the Projects. The Virus Vector Core, which is directed by Dr. Kristine Yoder supports all the projects of the PPG. HTLV-1 infected cells can be difficult to transfect making lentiviral vectors key to experimental success. Lentiviral vectors will be used for overexpression or shRNA reduced expression of genes of interest. CRISPR/Cas9 lentiviral vectors will be used to prevent expression of host genes or for homology directed repair when coupled with a donor DNA for homologous recombination. Integrase defective lentiviral vectors (IDLV) are part of an unbiased method to quantify the off-target editing of CRISPR guide RNAs. The Core is also developing a CRISPR/Cas9 vector with inducible, self-limiting Cas9 expression. The Animal Core, which is directed by Dr. Stefan Niewiesk and co-investigator Dr. Krista La Perle, provides animal model systems of HTLV-1-induced malignancy. These include rabbit model of HTLV-1 infection, transgenic mouse models of tumorigenesis, transplantation leukemia models in immune deficient mice.

Program project grants represent an important maturation of the research mission of the College of Veterinary Medicine. Historically, the National Institutes of Health has relied on multi-component awards, such as program projects, to encourage multidisciplinary collaboration in areas requiring integration and central direction of basic and clinical research components. Program projects and center grants have a well-defined central theme, include extensive shared resources or core facilities, and are led by a principal investigator who has the authority and responsibility to manage the overall research effort and budget. Typically a program project group consists of a set of investigator-initiated applications for independent research on related topics, with a formalized agreement to collaborate in specific ways to enhance the achievement of the goals of all of the projects. Other benefits of the program include the establishment of collaborations on an equal footing at separate sites and fostering formal collaborations between multiple institutions. The funded program project grant (years 16-20) is a visible product of the Center for Retrovirus Research, which originated and is administered in the College of Veterinary Medicine.