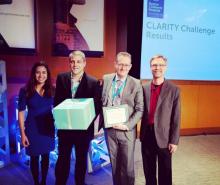 A team from The Research Institute at Nationwide Children's Hospital was recently announced the winner of the 2015 CLARITY Undiagnosed Challenge, a global crowd-sourcing competition in which medical teams employ genomics to solve featured medical cases. The goal was to decipher DNA sequences and provide information to five families whose genetic conditions have continuously eluded diagnosis.

One advantage the team had is expertise in a software developed by the hospital named Churchill, which was officialy released in January. This advanced technology allows for the speedy analysis of human genomes for disease-causing gene variations. Churchill can perform a complete analysis in as little as 90 minutes, a huge improvement considering the first human genome took 13 years to sequence. More than 400 academic research centers are now utilizing the software.

No major breakthroughs were made in the challenge, but several families received confirmation about previous genetic findings, according to a press release from Boston Children's Hospital. A few genetic variants were identified for potential further research.

“Genomic medicine is a quickly evolving frontier for health care," said Dr. Steve Allen, CEO of Nationwide Children’s Hospital. "Nationwide Children’s is setting the standard for how genome sequencing and analysis can be utilized to transform care for patients and families around the world.”

The second-ever CLARITY (Children's Leadership Award for the Reliable Interpretation and Appropriate Transmission of Your Genomic Information) challenge was hosted by the Manton Center for Orphan Disease Research at Boston Children's Hospital and the Department of Biomedical Informatics at Harvard Medical School. The results were announced on Nov. 10 at the Global Pediatric Innovation Summit + Awards.

"The patients in this Challenge were the toughest of the tough," said co-organizer of the challenge Dr. Alan Beggs. "In general, when patients with genetic conditions have their genomes sequenced, about two thirds of those cases don't get solved...Genomic sequencing is still a new area, but as we gain more experience with these tough cases, we can build a database and begin to see patterns emerging."