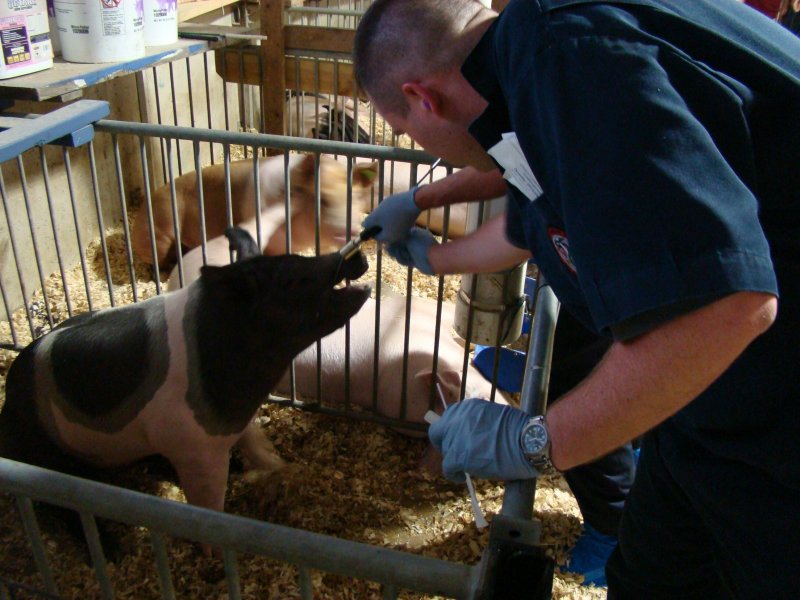 These virus strains pose a pandemic threat if they become capable of being transmitted efficiently from person to person and if limited protective immunity exists in the human population. Bidirectional zoonotic transmission of influenza A virus strains usually involves close contact between humans and swine. The United States has 3 major swine–human interfaces: commercial swine production, abattoirs (slaughterhouses), and agricultural fairs.

Agricultural fairs/exhibitions are unique and important because they facilitate prolonged commingling of pigs from numerous sources raised under varied management programs with millions of persons who have widely disparate histories of exposure to various influenza viruses. This situation creates an environment conducive to zoonotic transmission of influenza A viruses. More persons come in contact with live swine at agricultural fairs than in any other setting in the United States, and several human cases of influenza A have been linked to swine exposure occurring at fairs.

The purpose of our influenza research and surveillance efforts with exhibition swine is to proactively collect scientific data to help regulatory officials make evidence based decisions. In addition, we are actively evaluating preventive strategies to protect animal and public health. It is important to remember that influenza viruses are not transmitted by eating properly prepared pork and pork products.

Take a look at some of our swine surveillance data below!