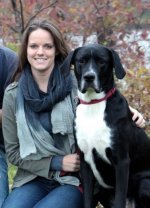 Ohio State University is celebrating Colleen Shockling Dent, now a
second year veterinary student, who has the distinction of becoming the 100th
person to have completed the program.

“The degree changed my life,” said Shockling Dent. “I just
knew I did not want to sit behind a desk all day. There is something thrilling
about epidemiology. Being at the front line protecting people from diseases of
animal origin is extremely rewarding. I am grateful for the time I spent in the
VPH program. I truly believe it opened a lot of doors that were originally
closed to me.”

In response to the growing need for trained public health
professionals who can address the problems associated with infectious diseases,
food safety and security, emergency response and preparedness, as well as
animal health and welfare, The Ohio State University's College of Veterinary
Medicine and College of Public Health partnered in 2005 to develop the Veterinary
Public Health specialization as an option within the Master of Public Health
(MPH) degree program.

The program remains one of only two in the nation to be
accredited by the American College of Veterinary Preventive Medicine (ACVPM). Colleen,
who completed her undergraduate degree at the University of Findlay,
transitioned directly into the workforce where she held a position as a
contract biologist at Beale Air Force Base in California.

“Although I greatly enjoyed my work, I found that I was
somewhat limited without an advanced degree when I attempted to pursue new
opportunities,” says Shockling Dent. Colleen quickly sought out graduate
programs and immediately connected with the Veterinary Public Health Program at
The Ohio State University. 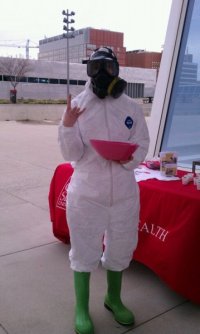 “My interest in the program grew out of my passion for promoting
sustainable and healthy relationships at the human-animal interface, she said. “The VPH program at OSU
really emphasized the One Health initiative which takes an integrative
interdisciplinary approach to supporting human, animal, and environmental
health. We studied ways of managing wildlife and
livestock to prevent diseases from leaving the woods and becoming the next
pandemic” she explains.

While in the program, Colleen completed a practicum
(graduate-level internship) in Bozeman, Montana where she conducted Chronic
Wasting Disease surveillance and studied the epidemiology of Brucellosis in elk
populations. As part of her culminating project for the VPH program, Colleen
surveyed playgrounds around the greater Columbus area for the presence of ascarids
(roundworms) – a parasite associated with dog and cat feces.

“Many people are unaware that infection by
this parasite can lead to ocular toxocariasis, which although rare, can cause
blindness in seven out of 10 of those affected by it,” she explained..” It most
often affects children, as they typically interact with contaminated
environments when playing outdoors. That is why it is so important to dispose
of dog and cat feces and to have pets regularly tested for parasitic infections
and dewormed.”

“What was useful about the MPH-VPH program was the support
system and network of professionals that is in place for students. You have the
freedom to make the degree your own by choosing unique elective course work, practicum,
and culminating project opportunities, while connecting with the some of the
most relevant public health professionals and researchers in the field.”

Colleen will be attending the USDA sponsored Smith-Kilborne
Program this summer where she will receive training in foreign animal diseases
that can threaten both agriculture and public health. She hopes to seek
additional training in pathology when she completes her DVM degree.

Graduates from the MPH-VPH program typically go on to develop
and execute public and private health programs designed to prevent and control
zoonotic and foodborne diseases in both animal and human populations. In fact,
many graduates now work for local health departments, the federal government,
the military, private companies, and international agencies as public health
commissioners, epidemiologists, emergency preparedness coordinators, food
safety specialists, and many more.

The Veterinary Public Health program is now
accepting applications for the 2014 fall semester until May 31st.
Please visit vet.osu.edu/vph-mph for more information.