The Alumni Recognition Awards are given annually to select college alumni who have "contributed to the enhancement of the veterinary medical profession through service to the college, dedication to organized veterinary medicine or the advancement of scientific knowledge or through the contribution of their time and effort for the development of their community and the public welfare" as stated by Ohio State's College of Veterinary Medicine Alumni Society, which the nominees have to be a member of in order to be considered.

The winners are chosen by the selection committee that comprises the president-elect (chair) of the Veterinary Medicine Alumni Society, three Alumni Society Board of Trustees members-at-large and one alumnus/alumna from the college faculty. Four winners were chosen for 2014, and include: 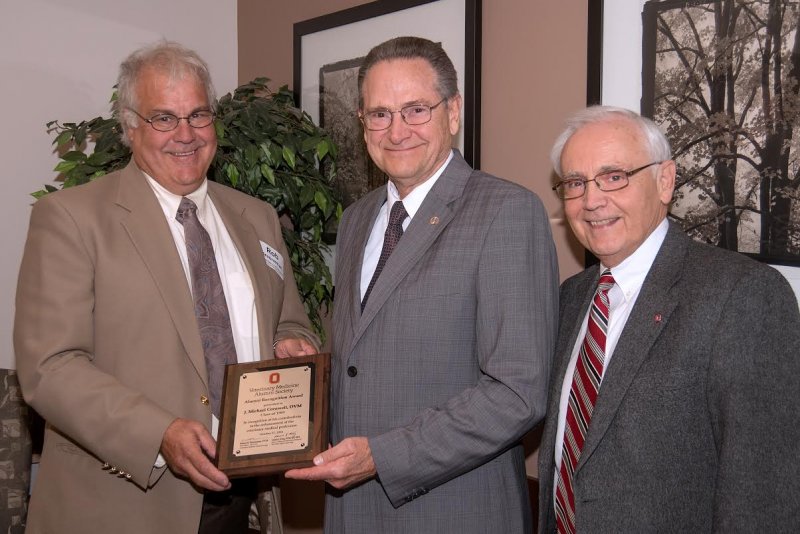 Dr. J. Michael Cornwell, currently of Beaufort South
Carolina, graduated from The Ohio State University College of Veterinary Medicine in 1969.
He was nominated for the Alumni Recognition Award for his professionalism and
dedication while in private practice, for teaching in academia and his community
outreach services.

Cornwell founded the Glencoe Animal Hospital in Columbus
in 1976, which was sold in 2001. He still provides advice and some training to
the hospital’s employees. For many years Dr. Cornwell served as an adjunct
assistant professor of veterinary preventive medicine at the Ohio State College
of Veterinary Medicine, as well as on the adjunct faculty of Columbus State
Community College and Manatee Community College, and a tenured faculty member
of St. Petersburg College’s School of Veterinary Technology. Prior to
practicing veterinary medicine in Columbus, Dr. Cornwell was Chief of
Veterinary Services at Lockbourne Air Force Base in Ohio and Bitburg Air Force
Base in Germany.

A significant highlight of Cornwell’s career was his
development of “Animal Safety is Fun,” an animal bite prevention videotape program that
he personally presented to schools and community groups. This program became an
educational tool for libraries, schools and animal welfare groups and has been
presented in all 50 states and six countries.

Hubbell has extensive teaching and research experience
and is widely published, including numerous books and book chapters that he
authored and edited. He has served on many crucial college and university
committees, and has been a graduate student advisor. He is past president of
the American College of Veterinary Anesthesia and Analgesia and has served on a
number of its committees.

A recipient of several honors and awards, Hubbell was
recently awarded the William L. Ingalls Award for Exceptional Service to the
College of Veterinary Medicine, the American Association of Veterinary
Clinician’s Faculty Achievement Award and was named the Ohio Veterinary
Medical Association’s 2008 Veterinarian of the Year - a prestigious honor.

Dr. Michael J. Huerkamp, professor of pathology and laboratory medicine and director of the Division of Animal Resources at Emory
University, was nominated for the Alumni Recognition Award for his achievements
as a veterinarian, scientist, educator and administrator. He completed post-graduate
training at the University of Michigan's School of Medicine, and has held academic and
administrative appointments since 1987.

Huerkamp has extensive teaching, research and
consultant experience and is widely published. He has lectured at numerous
national and international conferences, and his recent research is focused
on personnel and animal management. In 2009, Huerkamp was awarded the
American Society of Laboratory Animal Practitioners' Excellence in Research Award.

Beside his academic duties, Huerkamp continues to
organize recycling events for his community and has received several awards for
his work on Emory’s Sustainability Committee for recycling and composting
campus waste.  Huerkamp's nominator
described his selfless devotion to employees and acquaintances who are less
fortunate and have suffered great loss.

Dr. Don L. Noah was
nominated for the Alumni Recognition Award in recognition of his tireless work
over many decades for the betterment of animals, people and our nation. Born on
a dairy farm in southeastern Ohio, Noah was the first in his family to
attend college.

Beside serving in the Ohio Air National Guard, Noah was
owner of Ark Veterinary Hospital in Wooster, Ohio, from 1966-92, and was
president of the Ohio Veterinary Medical Association in 1990. He then became Deputy
Director of the Ohio Department of Agriculture for two years, and a relief
veterinarian in Arizona from 1994-2007. Noah is currently a sales and
training associate for Aesculight Surgical Lasers in Charlotte, N.C.