When Katie met Tommy she was volunteering with the college’s Veterinary Outreach program This program partners the college with Faithful Forgotten Best Friends (FFBF), a 501c3 nonprofit focused on improving the quality of life for the pets of Franklin County's underserved and vulnerable populations. The nonprofit provides pet owners with food, basic veterinary care, and vaccinations. Tommy was brought to FFBF by his original owner after he began showing signs of two fairly common skin disorders: mange and scabies.  A self-proclaimed “derm nerd,” Katie has always had an interest in veterinary dermatology and she quickly became one of Tommy’s biggest fans. She remembered, “When I first saw him, I thought he was absolutely adorable and even though you could tell something was wrong with his skin, he was so loving.” 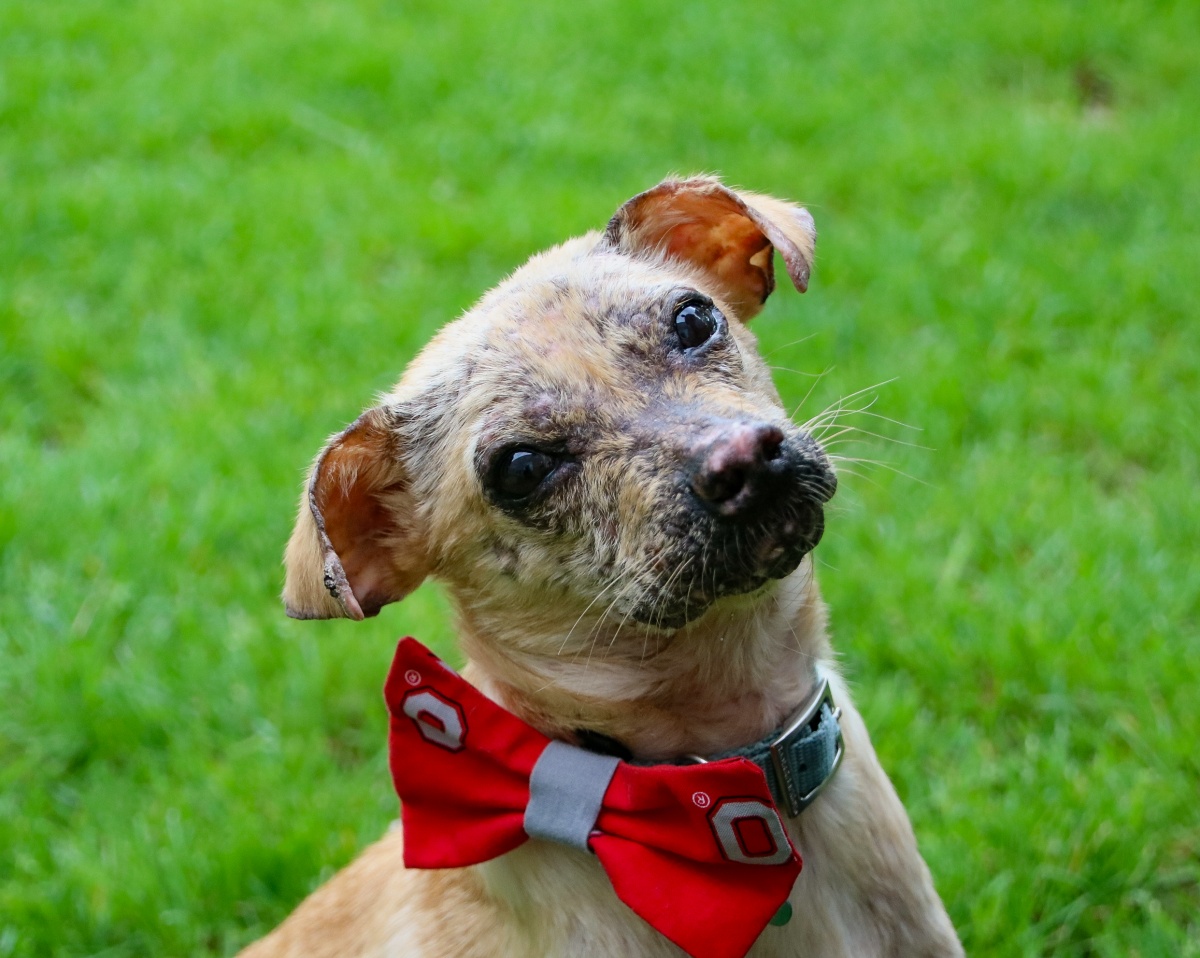 Although mange and scabies can be treated with basic veterinary care, his owner became increasingly concerned when Tommy was not responding to any of the treatments and his skin condition began to worsen. Katie recalled, “My heart was breaking when I got the news because it was clear that Tommy needed more extensive veterinary care than what was available through FFBF and I knew his owner had limitations.” To help save Tommy and give the owner a piece of mind, Katie offered to temporarily foster him while he received veterinary care. She said, “I love dermatology so being able to explore that interest while helping an amazing dog like Tommy is one of the best experiences I could have asked for while in vet school.” She continued, “Even though I had two Boxers and a cat, I knew Tommy belonged with us.”

Tommy’s owner accepted the offer and later that week, Katie brought him the dermatology service at The Ohio State University Veterinary Medical Center (VMC). While at the VMC,

Dr. Ryan Jennings, an assistant professor within Department of Veterinary Biosciences and Drs. Schnedeker and Diaz from the Dermatology service performed a biopsy on Tommy.

The test results showed that he had dermatomyositis, an autoimmune disease that attacks the skin and muscle by producing inflammation of the blood vessels. This rare disease is common in Shelties and Collies but was difficult to find in Tommy since he’s a mixed breed dog.

Currently, Tommy is doing very well and is responding positively to his treatment. Katie describes the drastic change not only in his health, but his behavior as well.  She said, “When we first brought him home he would sleep for about 23 hours per day but now he is active every day and loves to play with his toys and his pet siblings.” Tommy has regained most of his fur and has received a new lease on life thanks to the care and compassion he received from his family and the specialists at the VMC.

​Katie graduated from the College of Veterinary Medicine in May of 2017. Since then, she has become Tommy’s primary guardian and moved back to her home state of North Carolina where she is pursuing a career in Veterinary General Practice. She looks back on her time with Tommy as one of her most important experiences of vet school, “I knew when I was coming to Ohio State I was going to get this incredible veterinary education and I was prepared for the rigor of it all but I had no idea how powerful the experience was going to be.”  She added, “Becoming a veterinarian has been my goal since I was a kid and working with Tommy was a dream come true because I helped save a life and I received the ultimate reward- a lifelong companion.”