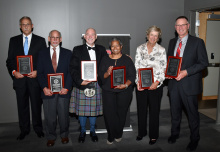 Each of the following recipients are Ohio State graduates who have made exceptional contributions to the veterinary profession through their scholarly work, teaching, research, education, mentorship, service, and outreach in the community:

Daniel Grooms, DVM ‘89, PhD ‘97, began his career in general practice in rural Ohio. He then accepted a position as clinician at the Ohio Agricultural Research and Development Center and quickly transitioned into a PhD program where he conducted research on Bovine Viral Diarrhea Virus (BVDV). Upon completion of his PhD degree, he accepted a faculty position at Michigan State University College of Veterinary Medicine where he was a professor, extension veterinarian, administrator and researcher. He was named chair of Michigan State’s Department of Large Animal Clinical Sciences in 2014 and was named an honorary alumnus in 2015 at Michigan State University and received a Michigan Honorary State FFA Degree in 2013.

During his time in Michigan, Grooms was actively involved in the 4-H program, his church and numerous sports. He started officiating Michigan football in 1998.

Grooms holds board certification from the American College of Veterinary Microbiologists with a specialty in veterinary virology. He is a former president of the American Association of Bovine Practitioners and has served on the U.S. Secretary of Agriculture's Committee on Animal Health. An expert in bovine infectious diseases, Grooms has been an active researcher in his academic career, receiving multiple grants from the U.S. Department of Agriculture, higher education institutions and private companies.

Grooms became the Dr. Stephen G. Juelsgaard Dean of Veterinary Medicine at Iowa State University on October 1, 2018 and is also an active contributor to his community. He is involved in Iowa 4-H, FFA and officiates for high school football.

Johnston is board-certified in both internal medicine and surgery, and she has been a mentor and inspiration for numerous equine emergency clinicians and countless interns, residents and veterinary students. She has shaped the specialty through her expertise and mentorship. Johnston has been a leader in the field of equine emergency, setting the standard that the sickest of patients need expert care, no matter what time of day or night.

Johnston’s publications reflect her vast experience and creativity in equine medicine and surgery. Her publications on surgical colic and urogenital techniques, in particular, have been very impactful on clinical practice.

Johnston’s natural gift for teaching, her humility, and her generosity with her time have made a lasting impact on her trainees and colleagues. She is known for taking care of all the house officers and young faculty at New Bolton Center, which has produced and attracted a large number of large animal ECC Specialists.

Linda Randall, DVM ‘81, began her veterinary career working with companion animals in a practice that was primarily dairy cattle. She then became the first Black woman to open and run a successful veterinary hospital practice in Medina County, the Cloverleaf Animal Hospital. During that time, she gained extensive experience as a board-certified specialist in companion animals, while also establishing herself as a respected dog trainer.

Randall was president and member of the Ohio Veterinary Medical Licensing Board, and currently serves on The Ohio State University College of Veterinary Medicine Admissions Committee. She has been a member of Leadership Medina County Board of Trustees and the Medina County Rape Crisis and Battered Women’s Shelter, where she also served as president and received the Medina County Woman of Distinction Award for her services. She was also on the board of trustees for Farm and Wilderness Camps of Plymouth, Vermont and the Tri-C Community College Veterinary Technician Program Board of Advisors. Randall is an Outstanding Alumna of Earlham College and serves on the college’s African American Advisory Board. In 2020, Randall received the Medina County Excellence in Leadership Award.

Throughout her career, Randall has written for local and national magazines on topics related to veterinary medicine and has produced educational webinars on positive reinforcement and race, explored trauma informed care and also the use of positive reinforcement to encourage non-violence in a juvenile detention center among other topics. She has participated in many outreach activities for youth and promoting diversity in veterinary medicine. Randall is open with her experiences facing adversity as a woman of color in the veterinary profession and hopes that it encourages younger students to follow their dreams.

Randall recently opened a 12,000-square foot dog training facility in Seville, Ohio called ‘One Smart Dog’ and specializes in helping people access their dog’s learning mindset through non-aversive training and instructing. Using the science of positive reinforcement, Randall is helping to set a standard for how to raise, engage and work with animals.

Craig Reinemeyer, DVM ‘76, PhD, is a board-certified veterinary parasitologist with recognized expertise in equine, ruminant and small animal parasiticides. He began the first five years of his career as an associate veterinarian and then joined the faculty of the University of Tennessee after completing his PhD in 1984. There, he was an effective teacher and researcher and participated actively in the academic veterinary community.

Reinemeyer’s desire to concentrate on practical clinical research in the area of therapeutics led him to establish his contract research company—East Tennessee Clinical Research, Inc. in 1997. His company has been one of very few labs able to carry out clinical drug testing to meet FDA standards in large animals as well as companion animals, and it has been instrumental in bringing a number of new products to market. His innovative and impactful research is recognized in the profession as evident by the number of New Animal Drug Applications (NADA) he has been involved with and their safety and approval process and ongoing use. He serves as president and scientific officer, a position he continues to hold.

Reinemeyer has been actively involved in organizations relative to parasitology specifically and the profession generally. He has served as a reviewer for 14 scientific journals.

Not only has Reinemeyer effectively managed the business of a complex research laboratory, but he has also stayed active in academic parasitology, continuing to publish papers and be a leader in equine parasitology. He was key in developing the system of deworming horses based on fecal egg count categories to slow the rate of development of anthelmintic resistance, which has become standard in equine practice.

The book he authored with Dr. Martin Nielsen, “Handbook of Equine Parasite Control”, now in its second edition, is the authoritative text for practitioners, parasitologists and veterinary students for understanding and managing equine parasite infections.

Reinemeyer is an engaging speaker and he has brought modern concepts of parasite control to students, practitioners and parasitology colleagues through an extensive record of outreach and professional presentations.

Steven Weisbrode, DVM, MS ’72, PhD ‘74, professor emeritus at The Ohio State University College of Veterinary Medicine, is an internationally well-recognized leader in veterinary pathology, specifically in the field of bone pathology and diagnostic pathology and veterinary pathology education. His accomplishments in pathology service, graduate student and resident training have had a significant impact on the profession at a national and international level. He has given numerous lectures on bone pathology at seminars such as the German National Pathology Society Meeting.

Weisbrode has a long-standing history of activities in the American College of Veterinary Pathologists, which includes service as president, council and examination committee member. These and other activities are well-recognized globally in the veterinary pathology community and, at the same, augmented the recognition of The Ohio State University as one of the leaders in this discipline worldwide.

He has received two of the most prestigious teaching awards at Ohio State’s College of Veterinary Medicine: The Dean’s Teaching Excellence Award for Graduate
Education (1994) and the Norden Distinguished Teaching Award (1996).

Wilkie was known as a very committed, effective and well-liked teacher of veterinary students, interns, residents and referring veterinarians during the duration of his 33-year tenure at the college, which is reflected in the numerous teaching awards he received including the Omega Tau Sigma Alumni Gamma Award (2000), Dr. Charles W. Fox Award for Distinguished Teaching (2012), North American Veterinary Conference – Equine Speaker of the Year (2013), National Gamma Award for Distinguished Service (2014)  and the American Association of Veterinary Clinicians - Faculty Achievement Award (2017). Dr. Wilkie has trained 21 residents who are board-certified in the American College of Veterinary Ophthalmologists or the European College of Veterinary Ophthalmologists and three Diplomates in Japanese Comparative Ophthalmology.  In addition, Dr. Wilkie has provided advanced training in ophthalmology to 20 graduate students and over 34 veterinarian ophthalmologists from 12 countries.

Wilkie's areas of interest include Ocular Pharmacology, Intraocular Surgery, and Artificial Lens Implantation. Wilkie perfected many surgical procedures to improve the discipline in veterinary ophthalmology. He assisted in the development of new cataract surgery, referred to as phacoemulsification with intraocular lens implantation. He was active in the American College of Veterinary Ophthalmologists (ACVO) including serving as chairperson, serving on the Examination Committee and as past president. He also served on many important College of Veterinary Medicine and University committees at The Ohio State University.