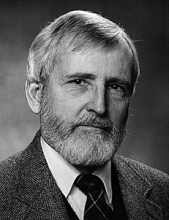 A message from Dean Rustin Moore:

It’s with sadness that I announce the passing of George Wilson, VMD, MS ‘59, Diplomate ACVS, on Monday, December 13, 2021. An emeritus professor, Dr. Wilson was a founding faculty member of the Department of Veterinary Clinical Sciences in 1970.

After receiving his VMD from the University of Pennsylvania’s School of Veterinary Medicine in 1955 and completing an internship at Angell Memorial Animal Hospital in Boston, Dr. Wilson joined Ohio State’s College of Veterinary Medicine in 1956. He received his Master of Science in 1959 and passed the America College of Veterinary Surgeons (ACVS) board exam in 1968, the first year it was given, being admitted as a diplomate with others who passed the first ACVS certification exam.

Dr. Wilson spent his entire career at Ohio State, retiring in 1988. He held various positions throughout his tenure, including Chair of the Department of Anatomy. Dr. Wilson was awarded the ACVS Foundation’s first Legends Award in 2005, which recognizes ACVS Diplomates who have developed a surgical or diagnostic procedure of significant value, proven by becoming the treatment, or test of choice for a given condition. This award was bestowed upon Dr. Wilson for development of the technique of perineal urethrostomy in cats, a procedure that is still being performed 50 years later to manage cats with recurrent urinary stones and feline urologic syndrome. In fact, when Dr. Mary McLoughlin, who ironically began her career as a faculty member at Ohio State, the same year Dr. Wilson retired, learned of Dr. Wilson’s passing, she said, “I performed a perineal urethrostomy the same day and did it the exact way it was first described in 1971. This is one surgical procedure that has “stood the test of time’. He was a surgical pioneer.” Throughout his career, his research focused on collecting epidemiologic data and clinical behavior of a wide variety of naturally occurring neoplasms in dogs and cats.

After retirement, Dr. Wilson attended the Culinary Institute of America in Hyde Park, New York. In addition to his culinary interests, he also volunteered with the Ohio Historical Society, the Columbus Literacy Council as an English as a Second Language tutor, and the Columbus Metro Parks. George moved to Scottsdale, AZ in 2011 where I had the pleasure of visiting him in 2017, and then he moved to Lewisville, TX, a suburb of Dallas–Fort Worth, in 2018.

Dr. Wilson was also an Emeritus ACVS Diplomate and was recognized as an ACVS Honored Mentor. Dr. Alan Lipowitz, DVM ’66, MS ’74, Diplomate ACVS said the following when Dr. Wilson was nominated for the Honored Mentor award: “George was responsible for guiding us through our residencies. He has remained a true friend. George is one of those mentors and surgeons who has not received the accolades due him. He is a man of wide-ranging talents, possessing an inquisitive mind.”

Please join me and The Ohio State University College of Veterinary Medicine family, the veterinary profession and the community in extending our deepest condolences, thoughts and prayers to the Dr. Wilson’s family.