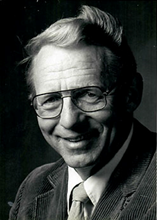 A message from Dean Rustin Moore:

It is with sadness I announce the passing of Dr. Albert A. Gabel on Monday April 12, 2021. For those who did not have the opportunity to meet and know him, Dr. Al Gabel was a pioneer and icon in equine and large animal anesthesia and surgery, dating back to the late 1950s.

Dr. Gabel received his DVM from The Ohio State University in 1954 and after graduation he served two years in the U.S. Air Force in Germany before returning to Ohio State to earn a master’s degree in veterinary anesthesia.

Dr. Gabel served on the faculty at Ohio State’s College of Veterinary Medicine for 33 years and served as head of the Equine Section from 1971 until he retired in 1989 as professor emeritus. He mentored 23 resident-graduate students, each of whom earned a master’s degree.

During his career, Dr. Gabel authored or co-authored 100 peer-reviewed articles as well as several hundred articles that appeared in horsemen’s journals. He was one of the 36 charter members of the American College of Veterinary Surgeons. He was a member of the American Association of Equine Practitioners (AAEP) since 1960 and served on the Sports Medicine Committee and Racing Committee. In 2000, he received the AAEP Distinguished Educator Award in honor of his lifelong achievements and contributions to the profession and the equine industry as a leader, clinician, faculty, researcher and for the significant role and impact he had on the development and training of equine veterinary practitioners and specialists through his mentorship.

Dr. Gabel trained and drove Standardbred racehorses for 11 years, earning recognition as U.S. Amateur Driver of the Year in 1995. He was elected president of the Ohio Standardbred Owners and Breeders Association in 1992 and initiated its merger with the Ohio Harness Horsemen’s Association.

I remember attending Dr. Gabel’s retirement celebration in 1989 and hearing stories and learning more about the impact he made throughout his career as well as hearing the many funny stories and what were referred to as “Gabelisms”, including but not limited to the following:

Dr. Gabel and his wife of 65 years, Lucy, lived on six acres in Dublin, Ohio, since 1965, where they raised seven children.

Dr. Gabel impacted the lives and careers of many equine veterinarians and others. Below are comments from just a few of the many he influenced and impacted.

“Al Gabel was important to my career and to the careers of so many that he trained. No one ever had a better mentor. He always asked us the critical questions, but he never stood in our way when we wanted to try something new or different. At rounds every morning, he always checked on how we were doing with whatever we were trying, asking questions that made us think without preventing us from finding our own way. Every lameness day, I use the things I learned from Al Gabel about doing a lameness exam. We have new equipment like the MRI and CT, but it is still the clinical exam, looking at the horse, that yields the most correct answers. If you are not actually treating the site where the horse is lame you have no chance to succeed. That, I learned from Al Gabel!” – Larry Bramlage, DVM, Lexington, KY

“A time to cut is a time to heal. That was Al’s philosophy and mottos! He was a dedicated professor who wanted to be the best teacher and the best equine surgeon. His love for the “horse” was obvious. May he Rest In Peace!!!” – Milton Wyman, DVM, Delaware, OH

“Dr. Gabel lived a long life and to the end remained steadfast in being unafraid to state his position on whatever challenges he or our profession faced. We are remembered in life for what we do, but more for the way we do them and Al always did things with confidence and courage. He was never afraid to challenge dogma and often put himself in the line of fire with the full intention of defraying it from his colleagues. We all had times when he helped us and times when we were a little fearful of him (at least for me) but he did an amazing thing in getting my academic career started and promoted. I will miss him dearly and though I did not always share his views, I certainly commended his courage in presenting his views to the world.”  – Stephen M. Reed, DVM, Lexington, KY

“No one taught me more about how to evaluate a horse for lameness than Dr. Gabel. Much of which I have passed on to the people I have trained. I could never thank him enough. I believe that we have all carried it forward and many, many horses are better for it. He also taught me how to organize and run a clinical service to maximize the teaching of clinical veterinary medicine. His open discussions of cases on rounds was emulated by all of us who trained under him. He taught me so many things about veterinary medicine and life.” – Robert K. Schneider, DVM, Newman Lake, WA

“Dr. Al Gabel was well known by his students for his unique and amusing communication style. Who can forget his loudly stating “Make It Bleed” when you were hesitating on that initial incision? Those with an interest in horses experienced his strong passion for helping horses and his compassion and respect for their owners. He taught being a horseman first, then each case was centered around a careful diagnosis and a treatment plan that was best for the horse and the owner. Dr. Gabel was exacting and demanding, but not for himself; it was for the horse. His students were exposed to not only the medical and surgical aspects of practice, but the horsemanship and industry requirements that were valuable to an equine practitioner. Many of Dr. Gabel’s mentees are good practitioners and proud to share what he taught them.” – John S. Mitchell, DVM, Waynesville, NC

“Growing up on a general livestock farm, I knew I was going to be a food animal veterinarian at 10-years-old. However, things changed when our area changed from general livestock to crop farming. I wanted to be outside and be a large animal veterinarian. I went to Scioto Downs Racetrack one Saturday night with my dad and that next Monday morning I sat down in Dr. Gabel’s office. I told him I want to be a Standardbred racetrack vet. He asked if had I ever jogged one? When I said no, he said I have a jog cart built for two, I train at Delaware County Fair, come up Saturday and learn how to jog a racehorse. The next thing I was padlocking his racehorse at The Meadows. I met an Omega Tau Sigma alum-—my fraternity brother Dr. Larry Smith, a former student of Dr Gabel’s who worked at The Meadows and Pompano Park. He became my mentor. So, Dr. Gabel got me launched. I am so grateful. Every day of my career was like a hobby! He will be forever missed.” – James A. Ford, DVM, St. Augustine, FL

“As amusing, outrageous, witty and memorable the verbal “Gabelisms” were, I remember thinking as a student that this guy really loved his job and, most importantly, loved the horses. He was not always right but he was a great veterinarian and a uniquely inspirational teacher.” – Dean W. Richardson, DVM, Kennett Square, PA

“I worked for a Standardbred trainer the summer after my first year in vet school and learned so much about racing Standardbreds. I used to have great discussions with him about how to drive and train them since the trainer I worked for was not able to drive at that time. It was so much fun and a great education experience.” – Ginny Reef, DVM, Kennett Square, PA

“I’m so sorry to hear of Dr. Gabel's passing. He was a cantankerous individual who always spoke his mind, which I appreciated. The students were often afraid of him. Once when Maxey (Wellman) was a veterinary student on equine, she was assigned to an equine patient on his service that had recently had a pacemaker installed. When using her bandage scissors to remove the bandage material she cut right through the pacemaker lead. She was distraught and terrified that she would have to go and explain what happened to Dr. Gabel. When she walked into his office in tears and told him what happened, he said, ‘Oh that thing. They should have never put that damn pacemaker in that horse in the first place.’" – Stephen DiBartola, DVM, Columbus, OH

Please join me and The Ohio State University College of Veterinary Medicine family and community in extending our thoughts and prayers to the Gabel family and thank them for sharing him and his contributions with the college, veterinary profession, equine industry and beyond over the last six plus decades.

For more information about visitation and the funeral mass, visit here.