Jianrong Li named fellow of the National Academy of Inventors 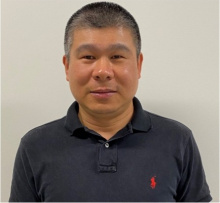 Two Ohio State University health sciences professors have been elected as members of the National Academy of Inventors 2022 class of fellows.

Jianrong Li, professor of virology in the College of Veterinary Medicine Department of Veterinary Biosciences, and Peixuan Guo, holder of the Sylvan G. Frank Endowed Chair in Pharmaceutics and Drug Delivery in the College of Pharmacy, are among the 169 academic inventors to be named National Academy of Inventors (NAI) fellows this year. They are the 15th and 16th Ohio State inventors to be chosen as NAI fellows.

In 2021, Guo was named Ohio State’s Innovator of the Year, and Li, along with colleague Stefan Niewiesk, was among the finalists for the award.

Li has led the development of a number of vaccine candidates for respiratory viruses and enteric illnesses – those that affect the respiratory and gastrointestinal systems. His lab worked swiftly to develop vaccines against the SARS-CoV-2 virus that causes COVID-19 in response to the pandemic, developing separate candidates using the measles and mumps viruses as platforms for a COVID-19 vaccine.

“The idea is that because children have been safely vaccinated for measles and mumps for decades, we could incorporate this vaccine into the MMR vaccine to prevent four diseases simultaneously: measles, mumps, rubella and COVID-19,” Li said.

These platforms also enable delivering a “needle-free” vaccine through the nose, which generates both a system-wide antibody response – the same response as that produced by an injection in the arm – as well as a mucosal immune response in the linings of airways, where viral particles attach to host cells. All currently approved COVID-19 vaccines are delivered intramuscularly but are unable to induce sufficient mucosal immunity, the body’s first line of defense against respiratory viruses. The White House’s effort to develop the next generation of COVID-19 vaccines includes an intranasal vaccine approach.

In each candidate, the team’s use of specific snippets of the “prefusion” version of the SARS-CoV-2 spike protein – the shape the protein is in before it infects a cell – and strategic insertion of those genes into modified measles and mumps virus genomes produced strong neutralizing antibody, mucosal antibodies and T cell immune responses and protected against lung damage in animals.

The SARS-CoV-2 vaccine candidates and a third vaccine candidate against respiratory syncytial virus (RSV), the No. 1 cause of human respiratory infections that can also cause serious illness in infants and the elderly, have been licensed to an India-based vaccine and pharmaceutical company.

Vaccines developed in Li’s lab have also been commercialized for use in protecting piglets from two deadly viruses, porcine epidemic diarrhea virus and porcine deltacoronavirus. Previous viral outbreaks have caused significant economic losses for the pork industry in the United States and worldwide.

A member of Ohio State’s Infectious Diseases Institute, Li has been awarded eight patents and has eight pending patent applications, and has entered into a total of eight licensing agreements with companies that are commercializing vaccine products developed in his lab.

Li, who joined Ohio State’s faculty in 2008, attributed his lab’s success to Ohio State’s creative and collaborative environment and support from his college and department.

“I am humbled and truly honored that my peers have considered me for this award,” he said. “This honor really belongs to the postdoctoral fellows, graduate students and research assistants in my laboratory. In the past 14 years at Ohio State, I have had the privilege to work with them to generate innovative ideas, make new scientific discoveries, and translate basic virology research into the development of novel vaccines against viral pathogens that threaten human and animal health.”